This year marks the 21st Birthday of Rainbow Guides, the youngest section of the Guiding movement. The girls are celebrating the occasion by giving Sunflowers into the community, wearing their uniforms to school to raise public awareness, and on Sunday May 11th, Hurst Division, which comprises of five districts and eight units held a giant Birthday party for around 70 Rainbow Guides. The theme for the party was “Fairies” and all the girls dressed in fairy costume. After a picnic lunch there were many activities, including making necklaces, tiaras and bracelets, they made a 21st birthday cake from fairy cakes, and made fairy wands. There were musical games, pass the parcel, a treasure hunt and dancing. The day concluded with a visit from the Mayor Cllr Nigel Betts, who helped cut the 21st celebration cake with Alice Evans from 7th Sidcup (Christchurch) Rainbows, who celebrated her 6th birthday on the same day. The event was held at the headquarters of Kemnal’s Own Scout Group in Sidcup. 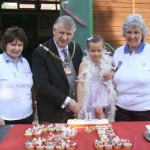 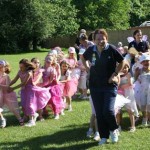