Five Senior Section members from GLK acted as ushers at the solemn Drumhead Service at the Royal Hospital Chelsea on 28th June. 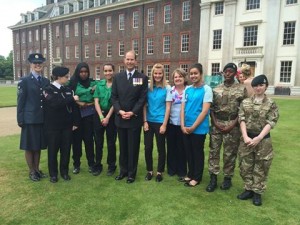 The event was attended by the Queen, the Duke of Edinburgh, Prince Edward and other members of the Royal family and was held to honour volunteers who served in World War One on the 100th anniversary of events that led to the outbreak of war with the shooting of Archduke Franz Ferdinand in Sarajevo on 28th June 1914.