At midday on August 1st 2014, 10 GLK Guides and Young Leaders met at Gatwick Airport with their trip leaders. This was the start of an adventure that had begun its story at selection last summer. Since first meeting in October 2013 we had fundraised more than £900 each, booked tickets and hostels, been camping and met up a few times to get to know each other. This day was long awaited!

On the morning of 2nd August we arrived at the site of the ‘Tett På’ Asker 2014 jamboree. It was raining. Heavily. We trudged across the large site in all directions, looking for our pitch and our hosts – the Kongsberg scouts. Anders, the scout leader, invited us to camp with them, and we joined their scouts (boys and girls from age 8-18) as two extra patrols on top of their group of 39.

As the scouts built a 3m high gateway to our camp (with a swing!), we Guides set about building a rubbish sorter. It put some lashing skills into action, and worked well all week!  The leaders then set about building a large table with benches for us all to sit at during mealtimes. All 52 of us could fit round the tables, and it even had a waterproof tarpaulin roof.

During the week at jamboree, we tried and enjoyed Norwegian foods from salmon and fish cakes to Sjokade and nugatti (two different chocolate spreads). Some even came home as gifts for siblings and parents!  We went swimming in Oslofjord, got suntans in the glorious Norwegian sunshine, learned to splice rope and learned some new camp cooking (cinnamon French toast and Mexican pitas were delicious!). We participated in a charity race for the Scout’s charity, Globalaksjonen (Globalaction), and ran a stall at the Tivoli, braiding hair and teaching people how to make loom bands to earn our Globalmarket badge.

We completed 13 additional criteria to earn our camp badge (this included being tied to a friend for two hours, doing good deeds for leaders and other scouts, making headdresses and taking a piece of wood for a walk like a dog!). There was hardly a moment to sit down as we moved from campfires to meals to activities with other scouts and dodgeball tournaments.
During a spare evening, the scouters taught some of us how to build structures using pioneering. We added a 3m tall tower to our gateway and put in a platform and steps halfway up. The girls were rightly very proud of their construction.

We were sad come the end of the week when we had to bring down our structures, tidy up and pack away our tents. The kit that was packed beautifully into rucksacks at the start of the week, was now struggling to fit in! (Some girls were struggling with 4 bags to the station!) We took some fabulous group photos and wished our hosts farewell – tears were shed, we had had so much fun.

Our adventure continued as on 9th August we started a 3 night stay in Oslo. We explored the city in a day and half and visited the Viking ship museum, some islands in the Oslofjord, the parliament and royal palace. We travelled by bus, tram and ferry to see as much of the city as possible.  On the Tuesday, we took a 4 hour train journey to Geilo (pronounced ‘Yeylo’)… we made our stopover brief and continued on to Flåm (pronounced ‘Florm’). It was beautiful!

The journey down some of the steepest railway in the world was stunning and the village looked like it belonged on a model railway. From Flåm we took a boat ride through the Aurlandsfjord and Naeroyfjorden, the scenery was incredible and we even saw some seals and Norwegian wildlife. We had some more traditional Norwegian food in the evening, sat in an old train carriage! Many of us enjoyed reindeer burgers, while others chose traditional fish soup, Norwegian sausages or salmon. From Flåm we got the train on to Bergen where we visited the markets and Bryggen (beautiful coloured wooden buildings), some visited the aquarium while others explored more of the town and took a ride on the funicular railway. At the top we bumped into some of our Kongsberg scouting friends, what a surprise! It was great to catch up! Our last evening in Bergen we went on the Ulriksbanen cable car, high above the city, before late night cheese toasties and hot chocolate.

We had a great adventure in Norway and a lot of fun. We hope the memories we have will last a lifetime and are looking forward to a visit from the Norwegian scouts to a UK jamboree in the future. 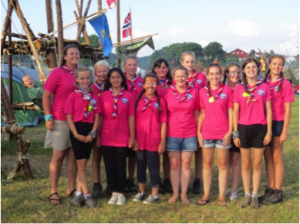 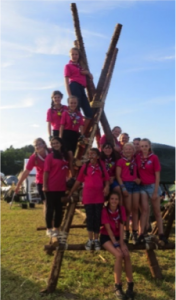