5 year old Olivia Matthews was enrolled as a member of Blackfen Rainbow Unit on Tuesday 12th October by her mother Louise Matthews who is leader in charge of the unit.

Roll back 32 years and it was 5 year old Louise herself who was enrolled by her own mother Alison Hope, who had just formed the unit and taken in her first ten 5 year old girls. Now, 32 years later Alison was able to take part in the Promise evening of her granddaughter.

Louise, who is also Commissioner for Lamorbey District, said: “It was a lovely moment to have my mum there to see me enrol Olivia at the exact same spot that I made my promise when my mum took in her first intake of Rainbows after starting the unit all those years ago.”

Alison said: “It was a very emotional and proud moment to see Olivia make her promise to her Mummy just as her Mummy had done to me when she was five. I am still involved and enjoy Guiding and am happy to be called upon from time to time to help out other units.” 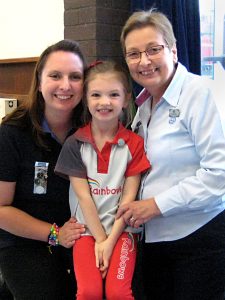 Jubilee Virtual Reality Beacon Trail – Danson Park
Mayor of Bexley joins Blackfen Rainbows for Platinum Jubilee Celebrations
Hearing Dog gives Bromley Young Leader the confidence to pursue girlguiding opportunites
We use cookies on our website to give you the most relevant experience by remembering your preferences and repeat visits. By clicking “Accept All”, you consent to the use of ALL the cookies. However, you may visit "Cookie Settings" to provide a controlled consent. Read More.
Reject All Cookie SettingsAccept All
Manage consent